What Was That Again?

This week, Tess takes as her prompt a scene from a wonderful children's story for adults . . . 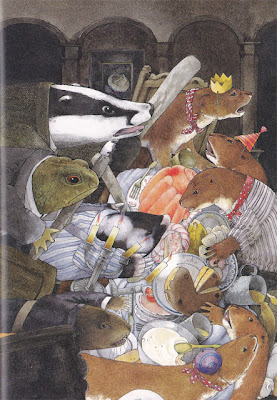 To begin with a thumping cliché - Simpleforth woke with a start.  "Wha . .?" he cried "Bodger? Wind?"  He added, largely as insurance in case he had woken up during English "Yes sir!"
The blackboard, and Joe Plug, Head of English, B.A.(Cantab), real name Vradovic Vradovicka, came into focus. "Ahh . . I see young Simpleforth has returned to the fold. Or should I say, the River Bank. Welcome!  We were discussing the role of Badger in the operation 'Reclaim Toad Hall.' Does this ring any bells, Simpleforth, um? Um?"
Privately, Simplforth wondered why the class was required to read this juvenille shite. 'Wind in the Willows.' I ask you.
"Sir, I think he wanted to clear the weasels out of the Hall by nutting them with his stout cudgel. But . . ."
"But, Simpleforth? But?  But the class no buts and cudgel them no cudgels"
"But cudgelling folk is old fashioned and tends to be messy. Blood spatter. That sort of thing. There are better methods."  Simpleforth was awake now. He knew the value of the dramatic pause, and paused dramatically.
"We're waiting, Major Simpleforth."
"Badger has a secret weapon, sir."  He paused again. The class turned to look at him.
"Which is?"
"T.B.  It's all over the news, sir. Badgers spread T.B. Their droppings are the vector. So Badger should . . . "
"I think we've heard enough! Badger had his stout cudgel, and his friends, Ratty and Mole. And Mister Toad."
"But sir! Up against weasels a toad would be about as much use as a chocolate teapot. They'd make toadmince of him in no time. Probably molemince and rat, too. Only Badger would stand a chance.  He'd whack a few skulls before he went down, fighting to the last.  Whereas if he made spreading T.B parson partle of  his seige strategy . .  "
"Forgive me interrupting.  Who is Parson Partle?  I don't recollect a parson person in 'Will in the Windows'."
For a moment, Simpleforth was confounded. But only for a moment.
"Oh, sorry, sir.  I was momentarily infected, not by T.B. but by Mrs. Malaprop.  When I said Parson Partle, I meant of course 'part 'n parcel'  . . .  and you meant 'Wind in the Willows' not 'Will in the Windows' just now "

I will end here, friends and followers,  pointing out that it was Jinksy who challenged me to get 'Wind In The Willows', Simpleforth and Parson Partle into this week's Mag. She owes me twenty quid.