The Trouble with Space, There's So Much Of It.

Ptolemy wrote the best
early sci-fi. His Almagest
taught - for what it's worth -
that the Sun goes round the Earth.

Copernicus (a Pole)
said "Rubbish! On the whole
a year would be more fun
if the Earth went round the Sun."

Kepler read the stars.
The orbit of Mars
looked all wrong. He found
it was egg-shaped, not round.

Tycho Brahe we are led to suppose
had a silver nose.
Perhaps that looked cuter, but how cruel
to lose your hooter in a duel.

Galileo Galilei
lived to rue the day he
dropped his balls from a tower
to see which one fell slower. (Ouch!)

And when Isaac Newton
fell off his fouton
he was charged with depravity
for blaming it on Gravity.

Albert Einstein, Esquire
had one straightforward desire -
to not rest content
till he'd proved Space was bent.

Whereas Edwin Hubble
thought of Space as a bubble.
Expansion would not stop
till the Universe went Pop!

Moonwalker Armstrong
sang this lunar swan-song.
"A giant leap for Mankind
if I leave Buzz Aldrin behind."

Professor Brian Cox
says the Universe rocks!
"There are billions and billions
of galaxies, flat ones and hilly ones."

Another great picture-prompt from Tess at Willow Manor . . . to refresh the Calliopean Muse 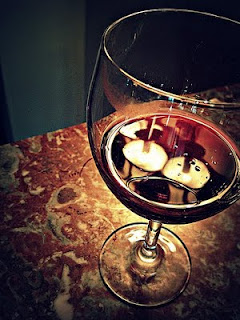 "A glass of wine is really fine,"
the sober poet mutters,
"But left in charge of a glass that large,
then each verse limps and stutters!
Resist the glass! I shall not pass
more tipple through my lipsy,
lesht Magpie vershe comesh out the worshe
becaushe the Toctor'sh dipshy!"

Danabug offers ticket-holders a line from one of her own poems as a prompt.  Poets must use the prompt line - "I am a crooked line" - as the first line or phrase of their entry.


Please Breathe Into This, Sir.
(Takes breathalyser from WPC and addresses
her in the solemn manner of the habitual toper.)
I am a crooked line of steps
home-going from the boozer.
Were you a young and pretty lass
you surely would not choose a
sad old drunk like me to love
unless I gave you money.
Life's come to such a pretty pass.
Life is no longer funny.
(Cries, then blows into breathalyser till eyes stand out
like chapel hat-pegs)
Your crystals have not changed their hue!
I've failed another test.
The story of my wretched life
although I've done my best.
Perhaps I'd get another chance,
improve this dreadful score
if I retraced my crooked steps
and sank a few pints more?
(Stumbles and falls. WPC calls for help on radio.)
Posted by Doctor FTSE at 8:59 AM 10 comments: