It would be good to say this Mag was all my own work.  The limerick - for which I apologise - is.  The artwork, both the inspiration and the execution, is by another blogger, to whom we rise our hats, well known to all Mag entrants, whose work this week is featured here.

Tess Kincaid, based in Operational HQ at Willow Manor has sent Smiddy and Boss (*) to investigate suspicious activity in an isolated house. 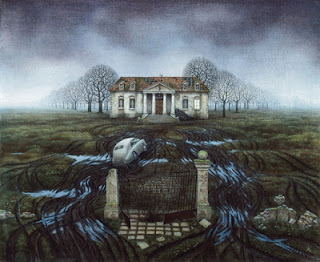 Wind of History by Jacek Yerka

"Reckon he's holed up in there, Boss?"
"Reckon that's why we're bogged down here for the night, Smiddy."
"There's a light on."
"You sound like you been to Observation Classes, Smiddy. Gotta diploma in spottin' lights left on, is it?"
"You know what the song says?"
"Song? What song? What's a dumb song got to do with a stake-out?"
Smiddy sings.  "Tonight, tonight put a light in the window. To prove that you love me, let it shine, shine, shine . . . !"
"You shoulda been in vaudeville. Voice like that you'd be a first class ventriloquist's dummy."
"Tonight, tonight put . .  "
"Smiddy, if he's in there you don't wanna announce our arrival with that caterwaulin'"
" . .  a light in the window. Tonight's the night . . . "
"Enough, Smiddy!"
" . . . I'm gonna make you mine!   'The Four Lads' cut the single, Boss.  My Daddy used to sing it to my Mom all the time.  Reckon she was the light in his window."
"Smiddy! Listen a minute. We're on police work here. I'm real glad your Daddy and your Mom lit up the room most nights, but here we're detailed to stake-out this beat-up subdivision and the City don't pay you for crooning. And you forgot to bring any burgers. With onions. And mustard."  (A look comes over Boss's face and his eyes roll.)
"Hey! Boss! Look!"
"Wha . .  Onions and mustard Where? Oh, Man! What? What is it?"
"The light's gone out."
"You'll not be singin' that 'Tonight, tonight' stuff again then? No encores?"
"Maybe he went to the bathroom?"
"You switch the overhead light out every time you go to the bathroom?"
"Think we should . .  ?"
"Yeah! I think we should."
They open the patrol car doors and step out, hefting their firearms.
"You go right, Smiddy. I'll go left."
"Right!"
"No! I said left.  Oh, never mind."
Using the hollows in the ground as cover, they approach the house. They station themselves on the stoop, one each side of the door.  Both chamber a round. Boss hammers on the door with his gun-butt.
"Police!  Come out with your hands up!'
They hear footsteps in the hall. Door chains and bolts rattle.
"No funny stuff, pal. One false move and you're burger meat. And no mustard."
The door opens. A little old lady is in the doorway.
"Face down on the floor, Ma'am. Hands behind your head . . . "
The old lady speaks.  "Oh Goody! Policemen! Do either of you lovely officers happen to have a spare lamp bulb? 'Bout a hundred watts?"

(*) Their earlier efforts on behalf of the NY(or similar)PD can be seen here
Posted by Doctor FTSE at 8:20 AM 11 comments:

More On the Horsemeat Scandal 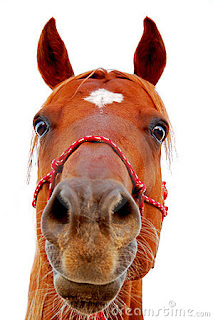 Now we learn that horses need passports! Getting the photograph must be arduous. How do you fit a horse into a photo-booth? Are they allowed to smile?  Or wear a straw hat with their ears sticking through holes? How much hoof luggage are they allowed? Would you want to sit next to an airsick horse? Etc.

"TIll the Right Time Comes . .


He thinks "Would be great to defrock it!
Perhaps, if I bought a wee locket
with her picture in it
promise never to bin it . . .?"
She thinks "Watch me pick this jerk's pocket."


Tess's prompt reminded me of the scene in the 1994 Linda Fiorentino film "The Last Seduction", where she picks up the fall guy for her con-trick.  Other bloggers will have taken a worthwhile view of the prompt . . . a picture by Joseph Larusso. 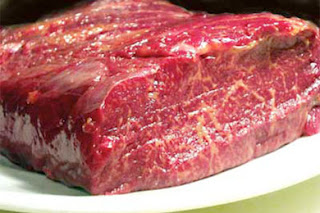 The explanation for horsemeat in burgers, lasagne, etc is really quite schimples! These newstyle victuals are made from horseflesh sourced in Romania (allegedly). The Romanian butchers have misheard a crucial word and have accordingly interpreted UK burger requirements somewhat loosely.

Let me help them.  The UK isn't in HORSETERRITORY,  lads, it's AUSTERITY, like in Grease, (oops, sorry  - GREECE!).

Sorry to beef about this. But get it right, eh?

G-Man asks for 55 words on a regular weekly basis.  I pick up the theme of his own effort which you can find on his blog, HERE. 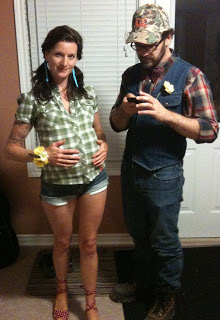 Mr. and Mrs. Cart wanted to name their son after a prominent American such as "Abraham", "Stormin'", "Ulysses", “Babe” or “Oliver”.  "How about” said Mrs. Cart "That guy who said the Martians were invading. Played Harry Lime in 'The Third Man'?"  "Brilliant" said Mr. Cart "Orson! That's agreed then . . ."

(So - welcome to the world, little Orson Cart)

DNA retrieved from some bones found under a Leicestershire carpark are said to be those of King Richard III, said to have been killed at the Battle of Bosworth Field, 22nd. August 1485. His horse got lost in the battle, hence his plea  "A horse!  A horse!  My kingdom for a horse." But there are no reports of DNA from his horse, and without that, where are you?(*)   At this point, all written histories say Richard was killed by Henry Tudor's scoundrels. Not so! One of Richard's troops, seeing the kingfree horse cantering off towards Market Harborough, offered him his bicycle. But Richard had never learned to ride and just kept going round in circles till he fell off.
"Sire," someone else in the melée called out. "Have mine! It has stabiliser wheels. You will be no more unhorsed, or should I say, unbicycled."
The King needed no second bidding, and, mounting the bike in a trice, pedalled around the carpark doing his monarchial bit. He soon realised that the bicycle was a mere 8 hands high whereas Henry's horses were upwards of 14. So all he needed to do was reach up, seize their riders by the chausses and unhorse them! Schimples! Then he nutted them with the tyre pump. In this way the tide of battle turned in Richard's favour, a circumstance which every historical account of the battle has failed to note.

After the battle, drinking a well-deserved cup of tea - a ceremony that persists to this day - Richard enquired "Where is the saviour who lent me his bicycle?" A footsoldier, having neither horse nor bicycle, stepped forward and bowing deeply before the King, acknowledged ownership.
"And thou art?"
"Oswald Simpleforth, sire"
"Then, because I owe thee my kingdom, Oswald Simpleforth, I shall dub thee Knight. Kneel, good sir!"
So Oswald knelt and the King laid his sword first on one shoulder then the other (**) - a ceremony that persists to this day - and said, "Arise Sir Oswald Simpleforth. Henceforth thou shalt bear on thine armorial these beknighted initials - S.O.S, for thou hast saved my kingdom and doubtless my soul."
This acronym also persists to this day and has been translated into 173 languages including Norse and Morse.

But that is not the end of the story. As further reward, the King granted Sir Oswald lands and manors in the County of Worcestershire, at Stourport-on-Severn.  So Sir Oswald became Sir Oswald Simpleforth of Stourport-on-Severn, and his armorial thereafter bore the initials S.O.S S.O.S - another tradition that persists to this day.

(*)   The horse DNA found recently in burger meat was from a different horse. Def.
(**)  Drunken kings should not attempt this manoeuvre.

More Years than I Care to Remember . . .

Tess offers us a picture which apart from the scaffolding, gives the memory-bank a huge jolt.

How many years? Before the internet consumed our lives.  Before satnav helped us drive to the wrong branch of IKEA and mobile phones helped us send for help to get home again. Before decimalisation of UK currency. Before Lennon and McCartney took pop by the scruff of the neck and gave it a much-needed shaking - remember David Whitfield and Alma Cogan?  Googleclue: I had just started my 2nd. Year as a student at Manchester University when the Russians launched Sputnik 1.

I studied and slept many an evening and Saturday morning in Manchester's Central Reference Library. It's circular - the picture doesn't show this to good effect - and the main reading hall within was round also.  I remember the leather seated chairs and the wide tables that were arranged to radiate out from the desk where the assistants in white overall coats scurried about fetching and carrying reference works for the students. I remember quite a lot about the heat-treatment of steel; not much about the rare-earth metals.

The library basement housed a lovely little theatre (about 300 seats) called unsurprisingly "The Library Theatre." There, for not very much if you had a student matriculation card, you could see the work of Tennessee Williams, Arthur Miller, Samuel Beckett, Berthold Brecht, J.B.Priestley the blunt spoken Yorkshire playwright, and many more, performed by - equally unsurprisingly! - the "Library Theatre Company."  Wonderful! Just wonderful!

The Library was about 2 minutes walk from the Free Trade Hall where you could hear the Hallé Orchestra under the late, great Sir John Barbirolli playing - typically - an overture, 2 symphonies and a concerto for a student ticket price of 30 "old" pence, (called "half a crown" or 2 shillings and sixpence in those days) - 12 and a half pence (~20 cents) in today's money. These concerts were given on mid-week evenings. They were called "Industrial" concerts, which Sir John instigated so that just about anyone could afford to hear great classical music played by one of the world's leading orchestras.  Did I say wonderful?

And then it was but a short stroll back to College, to drink beer or play darts, to eventually be examined, pass muster, and graduate, and go forward into life, no longer protected from it, and not  fully understanding what happiness is until we had left it behind.

You Big Boy. Me tease! 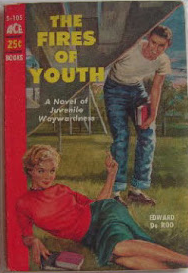 SV:   Over here, Big Boy. Do something for me.
BB:  (Addressing audience)  I'm gonna score with Sticky Vicky!
SV:  Want to do me a favour?
BB:  (Approaching, unzipping)  This is it!
SV:   Gonna let me flick ash into the turnups of those dumb jeans?