Ladies! Have you noticed the date! 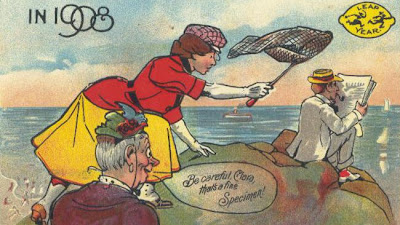 Love Lorn and Alone . . .
It's Leap Year’s Day, the 29th of Feb,
the once-in-four-years day when on-the-shelf
ladies chase hunky swains with cries of "Wed
me, you gorgeous lunk!"
I’ve missed the bus!
Each Leap Year Day I dress in my best suit,
use tons of brylcreem and stroll up and down
our High Street. See with what nonchalance I swing,
my walking cane and twirrrrllll my waxed moustache,
giving each passing lass a beaming smile,
a knowing wink and handing them my flyers
saying "Surely you know what day it is?
How can you let a prize like me pass by?"
In all the years I’ve had but one response.
Mostly they swerve aside and hurry on –
save once! A redhead, beauty unsurpassed,
stopped me, and with her kind hand on my arm
said "Are you alright, Grandad? Where do you live?
You’ve come out wearing carpet slippers, dearie!"
Posted in response to this week's d'verse invitation - Open Link Night Week 33
Posted by Doctor FTSE at 11:21 AM 9 comments:

25 years ago last week, we said Farewell to a leading protagonist of "pop" art. Now Tess  at Willow Manor gives us this memento picture.

It's Mr. Warhol himself, I do declare.  Is he looking for cans of his favourite model? 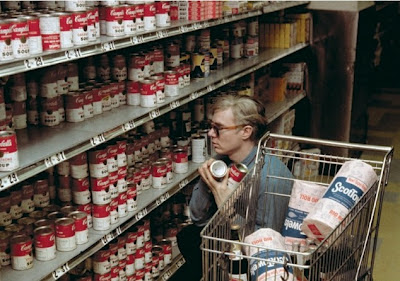 In Wal-Mart an artist called Andy
thought "Two pairs of hands would be handy.
Seems that I'm doomed to fail
in my search for oxtail,
'cos each one of these is tomayto!" (*)

(*) I have spelled it as it is pronounced in the USA.  Otherwise it wouldn't rhyme properly.  Someone, somewhere will understand . . .
Posted by Doctor FTSE at 3:34 PM 53 comments:

Friday keeps on coming around, and with it comes G-Man's picture  - and a stingy allowance of 55 words.   (The Mad Axeman, far right, plays no part in the story) 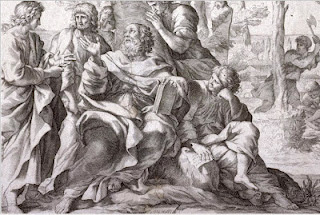 Philosophy Rules, O.K?
"He's not lookin' good, guys."
"I'm thinkin' the same myself."
"Philosophically speakin', what's wrong with the old gasbag?"
Socrates, gasping his last.  "What's wrong, you gormless half-wits is, I asked for dandelion and burdock. Brown. Fizzy. You gave me hemlock.  Plaudite amici! Comedia finita est."
"In Greek, you old fart! You think we're educated or sumfink?"
.
Posted by Doctor FTSE at 8:33 AM 15 comments: 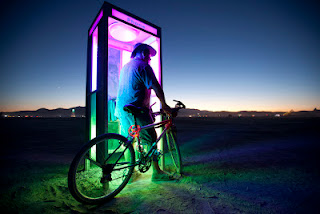 Speaks
"Is that Tour de France Race Control?
Please help. I am in a real hole.
I got lost on Stage Three.
When I stopped for a pee
they forgot about  me.
Now I'm stranded, I fear . . .
What?!!  Hang around here
until this time next year?
When the riders whizz past
I can catch up real fast
and back into Paris I'll roll?

Thinks
"This guy must be out of his tiny little mind."

Friday comes around again, and with it comes G-Man, demanding 55 words . . or else! 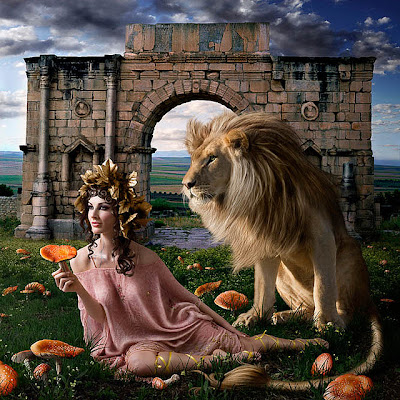 "Oooh, Agrippina, you don't want to eat too many of those!"
"Who said that?"
"That's a Magic Mushroom. It'll wreck your head, duckie."
"Am I hearing voices or what?"
"Next thing you know you'll be hallucinating lions."
"Just shut up! They're yummy. I've eaten truckloads."
"I've eaten so many I'm hallucinating yummy Roman ladies in pink."


Mary at Poetry Jam  asks for poems dealing with seasonings.

Give me a girl with garlic on her breath!
Fragrance of warmer air and jugs of wine.
Oh, such a one I'd love half way to death!
Not all the way, I could not spare the time

from thinking of her mediterranean hair,
falling about her shoulders and the wood-
en chopping board, the cloves of garlic there
blithe to be squidged to make her lips taste good.

the cooker-hood the pasta rolls and boils
as drops of garlic essence she drips in.
Not too much in case the penne spoils
nor so little her perfumed burps seem thin.

As aniseed is to the hunting hound
so hints of garlic urge my manly pride
and when she smoothes the garlic butter round
her person - she can run but she can’t hide.

Keep, if you please, your "Blue Grass" and "Chanel,"
witches' brews that all real ladies scorn.
Let me inhale the aroma I love well -
garlic sweet as sunlight each new dawn.

A real Oooerr image from Tess at Willow Manor this week! 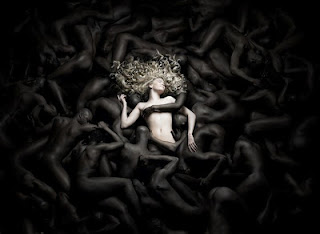 There was a young lady from Cheam
who could not explain her strange dream,
saying "I'm at a loss.
I might be Diana Ross -
but these guys are not the Supremes."

Many improving Magpies can be read via the Magpie site
Posted by Doctor FTSE at 7:16 PM 37 comments:

What kind of S.E.X was that again?

Rising to the surface once more, G-Man pleads for our 55 word Friday Fictions

"Depends where you put the italics."
"Eh?"
"Wild monkey sex. Imagine howler monkeys on amphetamines going 'YES!' and 'OMG!'"
"Whereas?"
"Wild Monkey sex is an out-of-zoo experience denied to caged monkeys."
"I see."
"And wild Monkey sex particularises the genus. Not wild elephant, armadillo or platypus."
"So what's wild monkey sex, daddy-o?"
"You trying to be funny?"
Posted by Doctor FTSE at 7:44 PM 22 comments:

This week's prompt from Willow Manor is a striking though sombre picture. 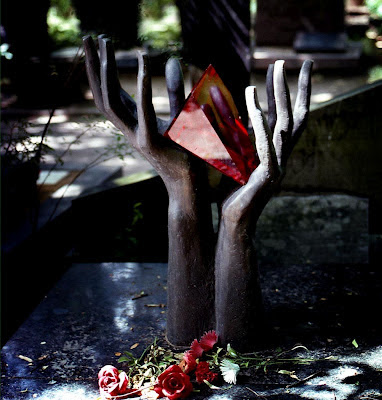 "Ah! There you are, Simpleforth. Tuesday 11a.m. Should you not be in a physics class?"
"I'm doing physics, Sir. And should you not say 'Here' rather than 'There' you are?  I am after all here, rather than somewhere over there."
"We talk about you in the staff-room, Simpleforth.  More lip than the rest of the Sixth Form put together.  So - before I haul you back into School - what is the nature of this physics you claim to be doing?"
"I'm listening for coffins. You see, Sir, these days -"
"You're listening for WHAT?"
" - lots of people want to be buried with their mobile phones in case they weren't really dead when they died."
"Weren't really dead!  Of course they were dead. This is a cemetery. Everyone's dead."
"You aren't dead, Sir.  I'm not dead.  And some of these (he points down) might not be. Then they need help. We really should try to unbury the undead. That's why I'm listening."
"You're listening, but I can't belive what I'm hearing.  Please explain - the big red crystal, the car battery, those headphones and that somewhat disgruntled TV antenna."
"The signals from underground are too weak to be decoded by a mobile phone above ground. I've tried with mine, Sir, and never heard anything. The underground is a radio blackspot -"
"You never got any calls from underground on your mobile phone in a cemetery? Should you be surprised? Should I be surprised? Of course not. Nothing about you surprises your teachers anymore. This has ceased to be funny, Simpleforth."
"But sir, if you were accidentally interred because some imported doctor who couldn't speak English said you were dead and the family agreed, wouldn't you want someone to be listening when you started knocking on wood, so to speak.  So I'm setting up a sort of giant crystal-set to see if I can pick up their distress signals.  If it works I can hire it out to the recently bereaved so they can be on the safe side."
"Simpleforth! If you were to be numbered amongst the undead, I'm not sure I'd want to be on the safe side.  Some people are better off d . . oh, never mind. Now. Back to school."
(Master seizes Simpleforth by an ear and starts to haul him away)
"Sir!  Sir!  Stop!  I think I'm picking something up! From right below our feet . . "

It's Friday again, and true to his habit, G-Man grants us 55 words to do out worst. 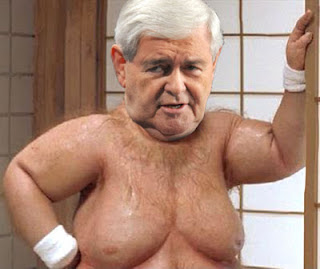 "You want Mr.Romney and Mr.Santorum tattoed on your . .  er . .  chest? Why,sir?"
"Because they're two of the biggest tits in America."