I once had a friend whose young daughter
was sadly allergic to water.
She had no bathing suits -
but a stout pair of boots
which, when she went wading caused laughter. (*)

WAS THAT ANOTHER "YES" I HEARD?

It's not often I post twice in one day, but conversation with a NO neighbour reminded me of the following story which nicely illustrates the chip on the Yesser's shoulders. It also illustrates, I think, the level of historical knowledge, political nous and diplomatic sophistication which the Yessers will take to the polling booths with them. My neighbour said "It's simple. They don't like the English. They imagine they live as latter day slaves under an English yoke. They'll vote Yes so that Andy Murray can say he plays Olympic tennis for Scoatland, not for team GB."

A Scottish gentleman who had drink taken (*) in the Curlers' Rest, Byres Road, Glasgow's West End heard an English voice nearby.  He sought out the offender and gave him a Glasgow Kiss.  This is a manoeuvre whereby you seize your opponent by his lapels, jerk him towards you and at the same time whack the bridge of his nose with your forehead.  The Englishman fell to the floor, scrambled to a sitting position and asked -

In passing, notice that our Scottish hero doesn't even know who the Sassenachs are/were.

Sassenach is derived from the Scottish Gaelic word 'sasunnach', literally 'Saxon' and was originally used by Gaelic speakers to refer to non-Gaelic speaking Scottish Lowlanders.

How the word came to be used as a vague insult to the English is not recorded.

(*) "The accused had drink taken" is a statement made many, many times in the Glasgow Sheriff Court by prosecuting counsel.

WOULD YOU VOTE "YES"?

The day after tomorrow (as I write) Scotland votes to detach itself from the United Kingdom. 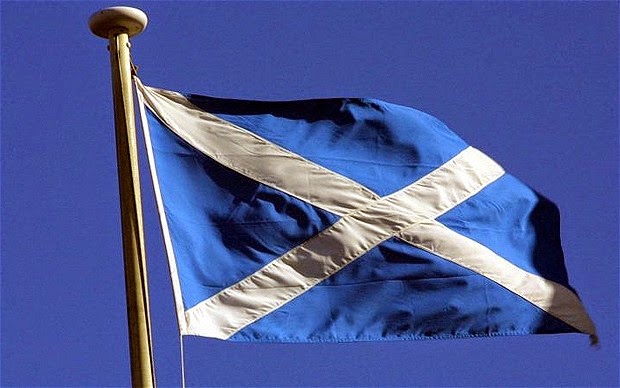 The Union as we know it today came about in a two-stage process.

1.  Scotland's crown was united with England's on the accession of James VIth of Scotland to the throne of Scotland in 1603. He subsequently became James VIth and 1st (of England). You can read about the family relationships that led to James getting two crowns for the price of one - sort of Inherit One, Get One Free - by Googling "Union of the Crowns."  So here's the first question that the overwhelming majority of YES voters won't know the answer to and won't even have thought about. After Independence, will the Crowns be deunited?  Will the Auld Dear in Buckingham Palace still be Queen of Scotland?  She'll still be Queen of What Remains of the United Kingdom, sure.  But will Scotland become an independent monarchy under Queen Nicola 1st or King Alex 1st? Or will Scotland find a legitimate descendant of James/Mary/Macbeth etc.  Alternatively, will the Land o' the Purrrrrple Heather become a republic with Alex as President and Nicola as Prime Minister or vice-versa?  And therein lies the YES voters' problem - see later.

2. Union of the Parliaments -  was brought about by two Acts. The Union with Scotland Act was passed by the English Parliament in 1706 and the Union with England Act was passed by the Scottish Parliament in 1707. Google "Union of the Parliaments" for details. But do note that Scotland was arm-twisted into the Union because the canny Scots had bankrupted themselves in the Darien Scheme (Google it) and needed a bail-out.  How many Saltire-waving Yessers know that?  We must hope that history doesn't repeat itself. We may wonder why RBS and Standard Life plan to move their HQ's, their legal domicile and their taxation obligations to England.  How many Yessers understand the significance of "legal domicile" as opposed to "country of residence" or "nationality"  Oh boy, Yessers. You are in for some surprises.
Once Scotland gains independence there will be no need - indeed, there will be no point - in the Scots voting SNP in the Scottish Parliamentary elections.  An independent Scotland will be dictated to by Alex and Nicola only until the first Scottish General Election.  Thereafter, the Scots will be dictated to by a permanent - I repeat - a PERMANENT - labour government. Just look at the present distribution of seats in Westminster.  Alex and Nicola can avoid this by a  fiat which declares that the term of the first independent Scottish Parliament will be one thousand years, c.f The Third Reich. But if they do the decent thing and call a General Election straightaway, they will be buried in the landslide to Labour.  Nice try, Alex.  Nice try, Nicola.  The upside to this is that an independent Scotland will give the UK or what remains of it, an equally permanent Tory majority.  Be grateful for small mercies.

Here are a few more questions that the Yessers ought to know the answers to, but probably don't.

Will an independent Scotland automatically qualify for membership of the United Nations? And if it does, will it have a seat on the Security Council?

Will the pound be its currency? On the international money markets the "pound" is actually the GBP (Great Britain Pound) So what will the money markets make of an independent Scotland's claim on the currency of the rump of the UK?

Finally - who will defend the realm of Scotland in the event of a foreign invasion? Unlikely at the moment but surely the question must be asked and although I haven't heard/read everything about the issues involved I haven't heard Alex or Nicola talk about this one.  And neither have the Yessers who no doubt expect the BRITSH army, the ROYAL navy and the ROYAL airforce will come to their assistance when the Vikings return to annexe Tarbet. Remember - if Scotland is not a member of NATO, NATO has no obligation to defend it.  The Scots could appeal to the "Auld Alliance" I suppose.  Google it.

Finally, a word about the electorate.  Looking at the referendum question from the other side it becomes "Do you want the United Kingdom to be broken up?"  The electorate is everyone over 16 who is legally resident in Scotland.  Native Scots living in England don't have the vote. Native English (like me) living in Scotland do have the vote.  Can that be right?  Should I emigrate?

I'm a NO voter - because I don't understand the issues involved (neither do most of the Yessers) and I can't begin to anticipate the consequences of Scotland gaining independence (neither can most of the Yessers, whose theme song is "Wha's like us?  Gae few and they're a' deid?") So my NO is a vote for the status quo.

But look on the bright side.  At least a Yes vote will sideline Alex pretty quick once the Saltire waving and the pipe skirrrrrling stops. Pity to lose Nicola, though.