Tess's prompt this week is a common sight on the narrow roads in the remoter parts of Scotland and the Scottish Islands. 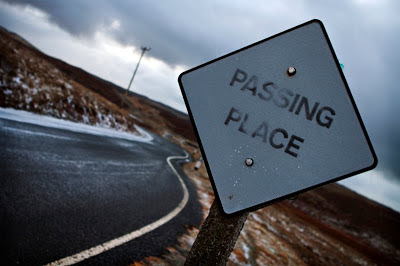 
"Sir, sir!  Pull in here!"
"It's a passing place, Simpleforth, not a lay-by.  The school mini-bus will block it."
"Exactly!"
"You can't park in a passing place!  Why do you want to stop?  Do you need a  comfort break?"
"No Sir!  I just want to work something out."
(Sotto voce) "OMG . . another Simpleforth theory." (Aloud) "Anway . . we've passed the passing place now.  If you want to stop we should look for a MacDonald's."
"In this wilderness?  Not another vehicle in site horizon to horizon. No MacDonalds, petrol stations, herds of antelope, village fetes, burnt out lorries. Nothing. Why do they need a passing place when nothing wants to get past anythng else?"
"You're becoming cryptic again, Simpleforth. And this road would be busy in summer. Tourists in caravans and so on.  So what did you want to work out?"
"Well sir, I wondered what would happen if two vehicles travelling in opposite directions both decided to drive courteously and both of them headed into the passing place at the same time and smashed into each other and the drivers got out, and after pointing at each other and at their crashed cars, they started raising their voices  . .  and then started fighting each other?"
"You have a fine schoolboy imagination, young man. But where is this scenario going?"
"Nothing else can get past now, sir!  Because the passing place is blocked."
"Point taken. So?"
"So when the next vehicles travelling in opposite directions arrive, they can't pass each other - "
"Of course not.  That's obvious."
" - unless one of them backs-up to the next passing place down, or up, the road.  And before they get there, they meet another vehicle travelling in the same but the opposite direction, so to speak."
"What?"
"Well, sir. Suppose one of them was heading south.  To get to the next passing place, it has to head north, but going backwards. And meets another vehicle heading south, but going forwards.  Another deadlock. Until the vehicle heading south backs up to the next passing place, but on the way, meets another vehicle . . . "
"Simpleforth, is this where I should bury my face in my hands?"
"Oh no, Sir!  The minibus could crash."
"So what exactly is your point?'
"Well Sir, if two vehicles crash head-on in a passing place, pretty soon you have a situation where the line of vehicles that was heading south is now going north backwards looking for a passing place and another line going . .  "
"Alright, Simpleforth. I follow your argument. So what should we conclude?"
"Well sir, how about  - Passing Places are not a good way of getting vehicles past each other and better to just widen the roads."
"Now why didn't I think of that?"


I am indebted to a fellow blogger (No.16) whose inspirational haiku was the inspiration for this effort. Thank you, Horseman.

A Dance To the Music of Time 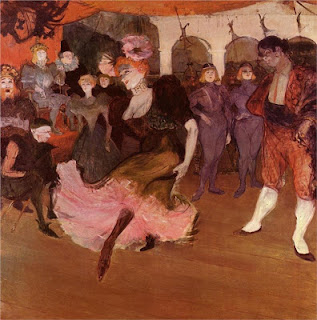 
This is what happened.  Accompanied by a fellow blogger who must remain nameless for reasons of anonymity and modesty, I or rather she and I, entered the Olde Timers' Dancing Competition, a sort of slowed down version of "Strictly Come Dancing." Contestants - who are not permitted to use zimmer frames or space-hoppers - must be in their xth decade where "x" is large and positive, and must enter in three categories, namely the St.Bernard Waltz(*), the stately Gavotte and to jazz things up a bit, the "Hands, Knees and Bumps-A-Mabel."  This is a variant of the better known "Hands, Knees and Bumps-A-Daisy." The variant was popularised in my, I should say our youth by the Edwardian master dancing-master Sir Lancelot Simpleforth-Jinks, known as High Jinks because of untreatable B.O.

All went well until we came to the last category when our chance of ending up on the medals rostrum came crashing to the ground. She bumps-a-mabeled - which is what we had rehearsed - but I lost the place and bumps-a-daisied more vigorously than usual. My partner hissed "Do a reverse cross-buttock! It's the only way out of this mess." But too late! We also came crashing to the ground in a tangle of limbs and petticoats amid cries from the audience of "They're not Olde Timers!  They're in their second childhoods! Disqualify!  Disqualify!"

I tell you, folks, at my age life is no longer a breeze as I'm sure you'll agree.  I need a drink.

(*) This lumbering 3/4 is included to give Old Dogs a chance.

It's the Mag prompt and the unfailing Tess Kincaid who puts these ideas into me head.
Posted by Doctor FTSE at 6:16 PM 14 comments:

As an aid for the hard of hearing Thos. Edison invented a headband with a flashing light on a little stalk that flashed on-and-off in the wearer's field of vision whenever their phone rang. Geddit?  So they knew the phone was ringing and could take the call - but when they picked up the handset . .  OOPS!