The Poem a Day Challenge invites poets to produce a new opus every day during April, so this is an offering for Day 15.   And for Kerry O'Connor's recent challenge from the Imaginary Garden With Real Toads 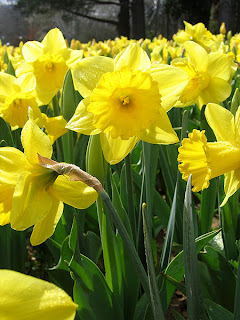 He claimed that lonely as a cloud
he wandered o'er the vales and hills.
He rambled how he saw a crowd
of yellow dancing daffodils.
Imagine Willie, arms outstretched
cavorting through the pretty flowers,
the silly pirouetting wretch -
then lying on his couch for hours.

Except he was not by himself!
His faithful Dot was by his side.
Some say she wrote that dreadful verse
and Willie found it on her shelf.
Whatever. Can it be denied
they never penned a poem worse?