The Poem a Day Challenge invites poets to produce a new opus every day during April, so here's an offering for Day 16. 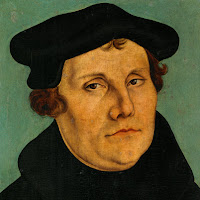 His ninety-five points made them squirm,

On April 16th 1521, Martin Luther was cross examined by the Holy Roman Emperor on charges of fly-posting handbills on a church door in Wittenberg.  (He protested against the curious idea that you could redeem your sins by buying "indulgences".  The indulgence salesmen objected, naturally.)