The Poem a Day Challenge invites poets to produce a new work every day during April, so this is an offering for Day 12 (with apologies and acknowledgements to the late, great William Topaz McGonagall) 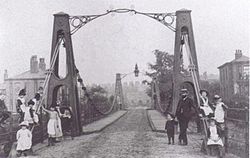 Beautiful footbridge o'er the River Irwell
alas you did not last very well
but no lives were lost I'm happy to tell
on that terrible day in 1831
although a squad of squaddies didn't have much fun.

A troop of the 60th rifle corps
were returning on April 12th from Kersal Moor
where they had that day been exercising
and now looked forward to reclining
at home in Pendleton amd Salford
but soon were to wish there was a ford
to cross the stream rather than a bridge for feet.
The Broughton folk soon heard the beat

of one hundred and forty eight marching boots
going left-right left-right along the route -
a drumming sound that seemed to yell
"This will knock down the footbridge of Irwell!
Their rhythmic step will resonate
with the bridges girders. This really isn't so great."

And soon the folk of Broughton were proved right
and the bridge engineers turned white.
They heard a sound like a pistol or musket shot
and all of a sudden the bridge was not
any longer across the silvery river
but in it. A bolt had snapped in two! A sliver
of shattered steel had plunged the men
into the Irwell (nicknamed "Inky" d'ye ken?) (*)

But I'm happily in a position to tell
that no soldier was drowned in the foul Irwell
but some had broken arms and legs
which surely this important question begs
"If the stronger our footbridges we do build
our troops will have less chance of being killed?
And simply by telling our infantry men to 'break step!'
we could surely give our British footbridges more pep."