The Poem a Day Challenge invites poets to produce a new poem every day during April, so here's a double-barrelled limerick for Day 18.

Albert Einstein died on 18th. April 1955.  Without him, some other physicist would have discovered his Theories of Relativity, and he could then have stuck to pulling faces. 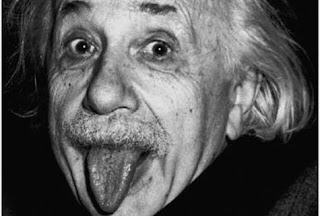 "Space-Time(*) is quite easy my friend!
And the Deutchmark(**) will drop in the end.
My theories prove
space tells mass how to move
And mass? Mass tells space how to bend!"

(*) Einstein dreamed up this strange "object"  It is four dimensional and fits neatly into the Klein Bottles I have discussed in another place.

(**) We usually say "Penny."  But she might be miffed at being included in these unruly limericks.