Week by week, bkm looks for writing prompted by an illustration from a childrens' book. This week, a delightful picture by Kay Akers 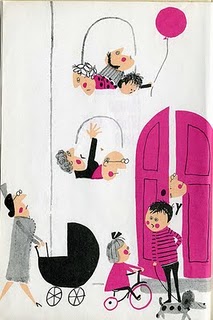 Stand By to Repel Visitors!

“Oh, Crumbs!  Here’s Auntie Ermintrude with Baby in its pram.
She’ll ‘Coochy-Coo’ and ‘Tricky-Troo’ and ‘Isn’t he a lamb!’
Not only that, she’s brought her son, our genius cousin Mike
And I declare, her daughter’s there, that monster on the bike.”
We must defend our afternoon or else we’ll prisoned be,
munching stupid fairy cakes and supping endless tea.
Artillery is what we need to stop them in their tracks,
Something to bomb them with and cry “Buzz Off!” or “Watch yer backs!”
These toy balloons on bits of string are not a good idea.
Balloons go UP! They have no punch! We need some stronger gear.
I know!  I’ve heard in days of yore one could invasions foil
by tipping on the invading heads big cauldrons of hot oil.
So find the chip-pan! Light the gas! Heat to a rolling boil . . .
(Kids, eh?)
Posted by Doctor FTSE at 7:50 PM