Crocodile Tears.
(with Artwork by Jinksy at 'In Tandem', where other tarradiddles can be found)
A very wealthy man kept a collection of exotic pets including a crocodile called Tears. On a certain Bank Holiday Monday, in warm sunny weather(*), the wealthy man threw a barbecue party. The party was held on the patio, about the size of a tennis court in the middle of which was a pool where Tears watched the ongoings, only his eyes and nostrils showing above the water surface the way crocodiles do, until one or other of the revelers threw him a burger or a bacon sarnie, when . . SNAP! . . the great jaws would open, the titbit would disappear down the awesome throat and Tears would sink to somnolence again. 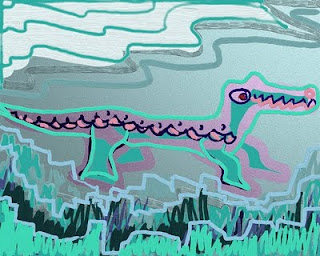 This gave the wealthy host an idea - the sort of idea that wealthy drunks always think is a good idea, even when it isn't.
"A hundred thousand pounds to anyone who fights the crocodile!" he announced. "Two hundred thousand if he or she survives!"  (The host, though wealthy, was Politically Correct.)
The words had scarcely died on his lips when - SPLASH! - one of the guests was to be seen in the pool, where the water was soon seething and boiling as Tears and he or she battled it out. For several minutes the outcome seemed to be in doubt, for the contestants disappeared below with only Tears' tail poking above the surface. But then, to the amazement of the watching he's and she's, the valiant partygoer climbed out of the pool with barely a scratch.
"Some croc that!" he panted- yes, it was a he, a compact redhaired Scottish gentleman, wearing a shredded kilt and clutching his bloodstained dirk, (that's dirk. D.I.R.K, o.k?)  "Blood, sweat, toil  . . and Tears is no more, sorry Big Man(**), but it was him or her or me."
"But how did you do it? How did you defeat a crocodile?" one of the guests - a she - wanted to know.
"A' scared the croc tae death, lassie."
"But . .  how?"
"A' showed him whit's under ma kilt.  An auld Scottish trick. See that noo, the lassie's fainted."
"I suppose I owe you a lot of money," said the wealthy man, disgruntled. (More disgruntled by the loss of a crock of gold than loss of a crock of a croc, as is the way with wealthy men.)
"Aw . . keep yer money, pal. A dinna want yer money."
"What?" cried the host. "Not want two hundred thous . . "
"Naw," said the victorious Scot.
"But . .  but . .  " spluttered the host, who, being wealthy, could not understand anyone, let alone a Scotsman, turning up their nose at free money.
"TAKE THE MONEY!" the other parties at the party encouraged.
Still the bold Scot refused.
"Well then," said the host, "if not the money, is there anything else I can do for you?"
"Aye, there is that, pal!' The crocslayer glared at the crowd and waved his dirk in an ominous fashion. "Ye can tell me the name o' the joker that pushed me in!"
(*)  Not in the UK, obviously.
(**) A genial Scottish greeting, with no implied hostility.
Posted by Doctor FTSE at 8:22 AM