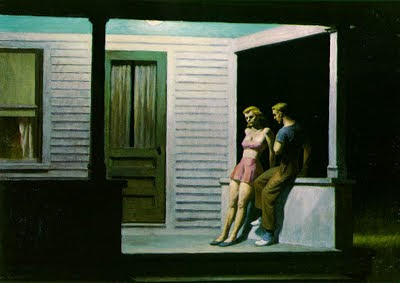 Bored! Bored! Bored!
What d'you fancy doin' then?
Dunno really.
(Pause)
Go inside? Watch telly? Strictly'll be on at half past.  (*)
Too hot inside really.
(Pause. One yawns. The other yawns.)
Fancy a beer, then. Down the "Swan"?
Maybe. Later. Dunno really.
C'mon! Gotta do something. Nice warm evening.
(Pause)
Could get our kit off?
Leave it out! Really! You're always wantin' it.
(Pause)
Too hot anyway really.
Knew a guy once, talked about the 'rhythmic slap-slap of sweaty bellies'.
You! You really disgust an' all.
(Pause. She sighs.)
Dump, this is.
I know! Got an idea!
What now then?
Go down the town. Take the videocam. Lot of fun down the town. Cops and Robbers every night these days, innit? Kids settin' fires an' that. Smashin' shop windows. Lootin'. Little kids nine an' ten  runnin' off with plasma TV's an' that. iPads. Laptops. You name it. Guys loadin' fridges an' stuff into white vans and harin' off. Police van got torched last night.  Britain in two thousand and elev . .
(She perks up)
What was that about shop windows. Really? Lootin' shops?
Yeah really!  Was on the TV News earlier.
Well c'mon!  What we waitin' for!  I could get myself some decent kit out of M&S instead of this pink tat  . . !
(*) Overseas friends!  He is referring to a widely watched UK TV show "Strictly Come Dancing" , an aspect of the "Bread and Circuses" government of UK which generally but not always keeps the mob happy
Posted by Doctor FTSE at 9:13 AM