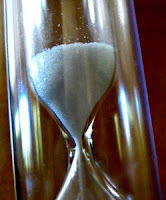 A Fresh Look at Big Bang Theory
Professor Einstein fancied eggs for tea,
soft boiled. One day he saucepanned three,
and then, as any half-mad genius would
added some water. “Mmm . . these will taste good,”
he thought. (“Thinking” is what he sometimes did.)
He lit the gas and put the saucepan lid
firmly upon the pan (Here your rhymer
hunts around for one that fits “egg timer.”) 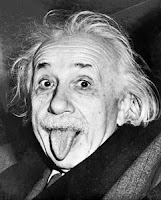 “Jawohl! Ze sand falls faster, falls mit haste,
falls schnell nicht langsam through ze narrow waist!
Curved space is telling sandgrains how to move!
Vo ist my pad und pencil!  I will prove
that ‘gravity’ means simply ‘going faster.’
Behold! Einstein, the Universe’s Master -
Time’s but an add-on to the concept ‘space’!
A four-legged, four-D never-ending place
for stars to rattle round in.  Oh, Eureka!
Oh Albert . .  You clever old truth seeker!”
So saying he sat at the kitchen table,
wrote out the math as fast as he was able,
sucked on his pencil, fought the calculus,
wrestled in four dimensions, paused to cuss
until he’d roughed out – while preparing tea -
the awkward bits of Relativity.
He had united warped SpaceTime with mass
by looking at curved shoulders in a glass
egg-timer . . . . HIS EGGS! Much eggboiltime had passed!
He rose. Too late! There came a massive blast.
Das wasser, er hat alles off geboiled!
His eggs were much, much worse than merely spoiled.
They were red hot. The kitchen filled with smoke!
Eggs, saucepan, saucepan-lid and cooker, broke.
Shards of eggshell like bullets through his hair,
but Albert, flushed with triumph, did not care.
The kitchen ceiling sprayed with hard-boiled egg
didn’t take Albert down one single peg.
What are three eggs but eggs? They can be spared,
for shattered eggs prove E equals m C squared!
Two Big Bang moments! One earth-changing day!
He works out Relativity, then straight away
explodes an Atomic Egg Bomb.  Oh Hurrah!
Professor Albert Einstein, you’ll go far!
Posted by Doctor FTSE at 7:38 AM