Once again Tess at Willow Manor asks us to dig deep into our poetic reserves, encouraged by this week's pictorial prompt. 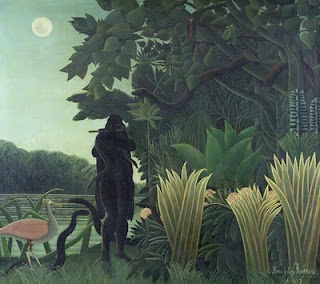 "The Snake Charmer" Henri Rousseau 1907
A primitive painter called Rousseau
bought Mrs. Rousseau a new trousseau.
But snakeskin pyjamas
are no use to Charmers . . .
"I'll shed them," she said. He said "Do so!"

* * * *
A charming Snake Charmer called Richter
tried charming a boa constrictor.
It squeezed her much thinner
and ate her for dinner
declaring "Music like that's nothing fit for!"

.
I dedicate these limericks to Stafford Ray (No.18 in the Magpie#83 Linky list) and ask if he will settle for an honourable draw?
Posted by Doctor FTSE at 6:11 PM