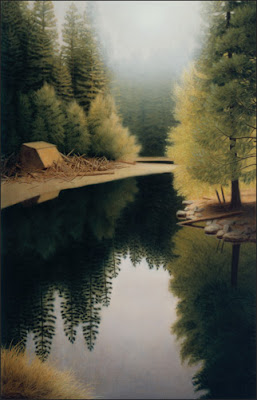 "Now see here, Simpleforth - you wanna make stones skip across the river and what happens?  You hit a shed.  I mean, how big was the stone, for Chrissake?  Big enough to tip one shed over and pulverise another?"
"Wasn't a stone."
"Not a stone? What then?"
"Hand grenade. Army surplus. Four second fuse."
"I'm tempted to ask what you were doing skipping a freakin' hand grenade. Things gotta be flat to skip properly. They aren't flat, hand grenades, Simpleforth. They're all . .  all kinda . . kinda . . "
"Nubbly?"
"If you say so. Alright. Nubbly."
"And I wasn't trying to skip it."
"You weren't trying to skip a nubbly freakin' hand grenade? So what were you trying to do that you turned one of those fine wooden sheds to kindling and tipped up the other?  Don't tell me you were trying to hit the freakin' shed!"
"No - "
"So what were you doin'?"
"I was fishing."
"Fishin'? Now I know I'm gonna regret this. Tell me. How do you fish with a hand grenade."
"Easy.  You pull the pin and chuck it in the water.  I goes off, and . . "
"You fragg the freakin' fish?  You're on thin ice here, Simpleforth, you know that."
"It doesn't fragg the fish. It blows them out of the water and stuns them and you just pick them up off the bank. Well known fact."
"I'm starin' at you hard, boy. I get a feelin' you're haulin' on my leg."
"Would I do that?"
"Is water wet?  But let's go down this here bomb-the-freakin'-fish road.  How come this dumbass angling demolished a fine upstandin' shed property of the National Park authority?"
"Ah well now!  You must blame Barnes-Wallis for that."
"Don't push me any harder, Simpleforth!  Who's this what's-his-name . . "
"Barnes-Wallis.  In World War Two. He invented the bouncing bomb . . "
"Now hold it right there Smartass. You think you can talk your way out of blowin' up the Park Rangers' refuge by draggin' in World War Two and bouncing bombs and some Wallace Barnes dude."
"But that's what happened here.  I tossed the hand -grenade sort of side-on, right? It hit the water and bounced. Twice. Just like Barnes-Wallis said. Google 'bouncing bomb'. Anyway, the grenade bounced off the water and through the shed window. Totalled it and put the other into lean-to mode. It still stands, but with difficulty."
(Long pause)
"Does that really work? That bomb the bouncing barn thing? That sounds real cool. Look . . there's still another half-assed shed. Bit weakened but still on its feet.  You got any more of them freakin' grenades?"
"Funnily enough . . . "
Posted by Doctor FTSE at 9:46 PM