Once again, Tess at Willow Manor delights writers with a picture to furnish their imaginations. 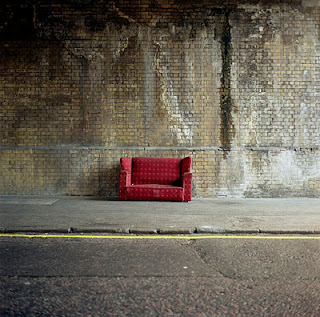 "I don't like the look of that, Smiddy. Not one little bit."
"Wasn't there yesterday, Boss."
"Worse than that. It wasn't there earlier on today."
"You're damn right, come to think of it. Whadya think?"
"Think we need back-up?"
"Could be somebody inside it, Boss."
"Good thinkin'. Just what I was thinkin'. Just the sort of place these hoodlums always hide out in. O.K. I'm goin' in. Smiddy - cover me."
(Footsteps as Boss crosses the street. )
(Shouts)
"Come out with your hands up and lie on the ground face down. Lie on the f****ng ground!"
(There is no response from the settee or from inside the settee.)
"On a count of three, come out the goddam settee! One!"
(Smiddy joins Boss on the sidewalk in front of the settee.)
"Two!"
(Both heft their firearms and chamber a round.)
"We can claim it resisted arrest, Boss. Or the guy inside it did."
"Damn right! Three!"
(They look at each other and Boss nods.  Both fire several rounds into the seat and back of the settee. Nothing happens.)
(Pause, then) "Got an idea, Boss! Ticket it for parking on a yellow line."
(A third voice enters)
"You guys blind or what? I'm not on the yellow line. And I'm not parked. I've been fly-tipped. On the sidewalk."
(Boss and Smiddy stare for a moment at the settee and at each other, then turn and scurry back to their patrol car and fire up the motor and rev away, tyres smoking. Three or four blocks later . . )
"Not a word, Smiddy. Not. A. Word back at the station-house. No incident report. Nothing. Just call the Cleansing and tell them get a dump truck down there."
(Smiddy, driving, looks in the rear-view mirror.)
"Boss!  Jesus H., Boss! The settee . . . it's following us . .  "


Drat! I smell something burning. Blogpals are invited to complete the story for me while I go investigate.
Posted by Doctor FTSE at 7:37 PM