The inspiration for this Magpie comes as usual from the always inventive Tess Kincaid at Willow Manor who invites us to lunch with this George Tooker picture. 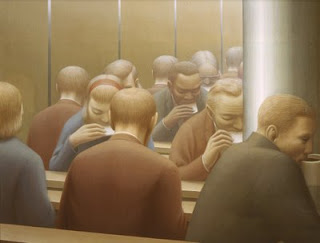 Boss, Smiddy and The Rookie took their lunchbreak on an old red settee that had followed them to the station-house in a previous blog.  The settee sat on the station-house roof and Boss, Smiddy and The Rookie sat on the settee to eat their sandwiches.  It was a good place for lunch. It was six floors up so the Captain could not see them.  They had hauled the settee up there themselves. They were a great team.
"Boss - what's the fillin' in yo' sandwiches?"
Boss lifted a corner of bread and peered. "Cheese slices, Smiddy. Again!"
"Mine too," said Smiddy.
The Rookie said, "And me. Same as every day."
All three glared at their limp sandwiches. Then at each other.
"I'm pissed off with cheese slice sandwiches every day" Boss said.
"Me too, come to think of it."
"And me" said The Rookie.
"Then this is what we'll do. We're six floors up, right?"
"Right."
"Right."
"So we each tell our womenfolk - look, if you make up cheese slice sandwiches one more time I'm gonna throw myself off the station-house roof. Six floors. Splat. End of salary. End of pension rights."
"Great idea!"
"That'll get some action!"
They hauled themselves out of the settee. They made high-fives. They punched air. They were a like-minded, co-operative team.
Next day lunchbreak they settled into the settee. Boss bit into his sandwiches and delight spread over his face. "Now ain't that something! Spicy chicken and bacon with some goddam piccalilli. That's what I call a sandwich. How 'bout you guys?"
The Rookie bit, and rolled his eyes.  "Man oh man! That's gotta be parma ham sliced wafer thin with cottage cheese, shallots and hint of garlic. Wholegrain bread, too. I'll sleep all afternoon!"
Smiddy bit down on his sandwich, said "Oh f**k, not cheese slices again!" and got out of the settee and vaulted the roof parapet and vanished from view.  The team would never let each other down.
Boss said, "Must of forgot his wife's away visitin' her Ma. So he's been makin' up his sandwiches hisself."
"You  reckon?  Poor old Smiddy. Splat - just like that, eh?"
They carried on munching, then Boss said, "Might as well finish his cheese slices?"
"Might as well," said The Rookie. "Waste not, want not. Can I drive the black-and-white now, Boss?"
Posted by Doctor FTSE at 6:25 PM