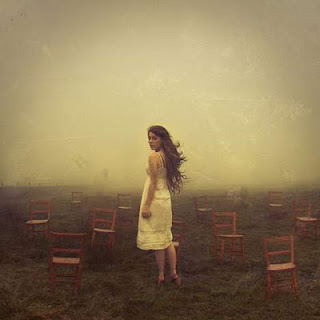 "Please . . just give me a minute to explain. It's a game called "The Other Musical Chairs." Y'know how in the real game, one chair is taken away every time the music stops, right? And one of the partygoers has to either drop out or get trampled to death in the rush for an empty chair, right? Until there's only one chair left for the last two people to fight over, right? Well, we were losing too many chairs that way and they don't come cheap. They were getting broken and some people were actually nicking them can you believe it and selling them on "Bargain Hunt" and "Cash in the Attic" and so on. Chairs do have rights, y'know, like the right not to get broken or pinched. So we thought, let's play the same game, more or less, but instead of taking the chairs away one at a time we'll take the people away one at a time, right? Till there's only one guy left - and whad'ya know that's me! All the chairs are still here and looking good, so that's good, no more bills for repairs to chairs and so on.  You wanna know where all the people are? Far enough away in the mist so you can't hear the gunshots. HeHeHe!"
(Worthier responses can be viewed at Magpie Tales.)
Posted by Doctor FTSE at 8:47 AM