Tess at Willow Manor asks us to critique this painting for Magpie 125. 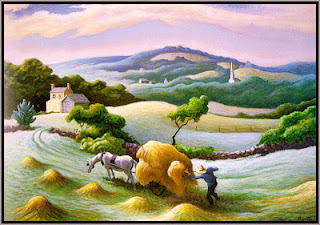 "You seem unusually thoughtful today, Simpleforth. Is anything the matter?"
"I was wondering what Constable would make of it."
"I can't bring to mind a Constable in the art class?"
"No sir. John Constable. English painter. 1776 to 1837. Romantic landscapes of an England long vanished, where sturdy yokels and sturdy horses toiled in the fields when they weren't getting their haywains stuck in rivers.  Not like this one, which is certainly more hay than wain where some of the hay seems to be falling off the wain and a horse with an unnaturally long neck is apparently bent on homeward plodding his weary way to a farmhouse with a garage at the side but no door.  I mean look at it, sir! It's a "Haymaking" by David Hockney out of Vincent van Gogh! And the haycocks look like Yorkshire puddings under a plastic sheet."
"If I may interrupt the flow of your appraisal for a moment, Simpleforth. What's this about a haywain stuck in a river?"
"That was before the invention of the car-wash, sir.  None of the analyses of Constable's picture mention that.  Maybe the wain isn't stuck in the river. Maybe the yokels pay a groat or two to wash the wain in the river before high-tailing it to the haymeadow to load up. It is empty after all. Maybe they could wash the horses as well. Or maybe they've already sold the hay on the black market and are heading home by river so's to cover their tracks."
"Have you been smoking something behind the bike-sheds again, Simpleforth?"
"And have you noticed how beat-up the haywain is?"
"You can hardly see the haywain . . . "
"Not that one, sir. Constable's. It looks ready for the bonfire. It's hanging together. It's kindling. The sort of rubbish you  sell to 'We Buy AnyWain.com' "
"I'm afraid I'm not following you at all, Simpleforth. Which I must say is not unusual. Just get on with your appraisal of Benton's painting and hand it in by lunchbreak."
"Lunchbreak, sir, would be rough cider in leathern bottles and massive hunks of bread and cheese and a snooze under the haystack while the honest sweat dried on their brows and only the milkmaids for company - elements conspicuously absent from Benton's effort."
"Perhaps that's as well. Um . . er . . would you like to speak to the school Nurse?"
"Why sir?  Does she paint haywains as well?"

Reader's as puzzled as was the art teacher by Simpleforth's discourse are referred to the picture below: - 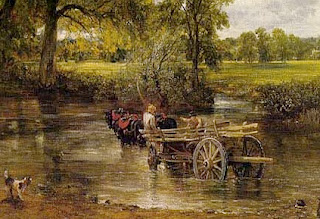 Part of "The Haywain" by John Constable.