The Ides of March

G-Man made a brave attempt at a Friday Flash Fiction 55 synopsis, but the truth is far different . . . 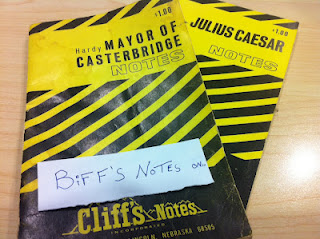 Julius, Mayor of Casterbridge is in the Forum. A guy called Mark Anthony shouts he wants to borrow ears. “I’ll sell you my wife Elizabeth’s ears for V denarii” says Julius.  The crowd doesn’t like this. They stab him XXIII times.  “Oh, you brutes” he cries, expiring.  Anthony marries Elizabeth, played in the film by Cleopatra Taylor.
.
Posted by Doctor FTSE at 10:20 AM