Tess gives us an appealing photo of a dog with a world view to inspire us this week.

The Man in the Bowler Hat 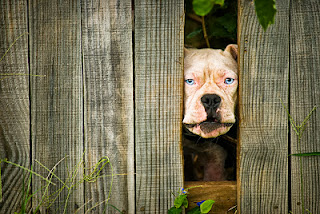 Here he comes again. Same time every morning. That man in the bowler hat.  My ambition is to make his hat my own.  If the gap in my master's fence was one plank wider I could achieve my goal.  Every morning the man leans down to pat me and says "Hello, Boy! How are we today?" Well, I know how I am. All I know about him is he's wearing my hat. Where was I?  Yes. If the gap was a bit wider I would growl and throw my head back and bark. Whereupon he would jerk his hand away and look alarmed. When he backed away I would squeeze through the gap. Then he would look  really scared, wondering whether to stand his ground and make conciliatory noises, turn and walk briskly away, or run for his life. I'm a big dog, and powerful, despite being pink with blue eyes.  Really, he'd have little chance.  If I could talk I'd say "I don't want to hurt you. Just hand over the hat." But as you know, dogs can't talk, except for some pathetic little mutts who get on TV because they can say "Sausages." So I'd spring. Too bad if I knock him over. I'd seize the hat by the brim and yank it off his head, so I would.  The man, recovering from his alarm, would see me lying down the way dogs do, full length with the hat between my front paws. Maybe he'd say "Ah!  It's a game you want?  You want me to throw the hat and shout 'Fetch'!"  He'd be confusing hats with sticks. The Man Who Thought His Hat Was a Stick. But when he reached down to retrieve his hat I'd get a grip on the brim.  I'd win the pulling match because I'm big and strong as well as pink.  Pretty soon he'd see my teeth marks in the brim and mutter something like "Oh botheration! Now it's all serrated.  Well, I can always buy another hat."  Then he'd pat me on the head and walk away.  Maybe he'd look back over his shoulder, to see me biting more bits out of the brim so it looks like a black flower with petals. But he'd be round the corner before he saw me biting a big hole in the smooth, round crown of the hat so I can push my head through it and wear it  round my neck, the best dog collar in all the world.  Pity the gap isn't wide enough.