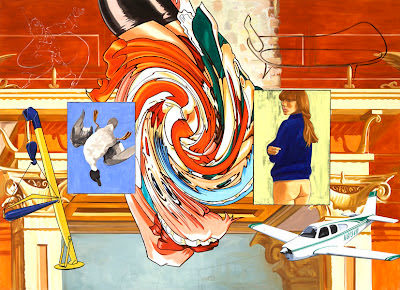 "Do you really need the magnifying glass, Simpleforth?"
"This painting is not as random as if might seem at first sight, sir."
"Really?  Is that Simpleforth's view, or did you read it in Gombrich."
"Gombrich was dead before Salle painted this . . er . . painting, sir."
(Sotto voce) "I never learn!" (Aloud)  "I asked you about the magnifying glass . . "
"Notice the title, sir. "Flying Down"  The title is surely highly relevant to the central feature of the picture.  Or vice-versa."
"The spiral?  You or I can do things like that with the 'Twist' effect in Photoshop."
"Look carefully, sir, and you can see not one but two terrified faces, albeit upside down.  Salle has not only twisted the doomed passengers into a spiral of fear as the Cessna . .  "
"Cessna?"
"The little white plane about to attempt an emergency landing in the fireplace . . as the doomed Cessna spirals into the flames - " (He breaks off.)
(After a pause) "Proceed, Simpleforth. I daresay we have to hear a lot more of your commentary before we get round to the magnifying glass."
"It's not about a Cessna crashing, sir! It's the stack over Heathrow Airport!"
"It's the what?"
"See, sir.  You can't just stop a 757 or whatever in mid-air. They tend to plummet. So if there's no landing-slot available, ATC sends them round and round above the airport in a slow descending spiral, separation about 500 feet. It's called 'the stack'. Now, a plane going round in a circle leans over to one side. And the ground is looming closer every time round the stack. That, and the grinding noise of the flaps  . ."
"ATC? Stacks? Flaps? What are you talking about?"
" . .  of the flaps going down make the passengers think one of the wings has fallen off." (He pauses again) "That probably explains the little crane thing. Looks like a wing-section it's lifting, don't you think, sir?"
"Perhaps. But you don't need a magnifying glass to see the little crane thing -"
"Then again, sir, maybe it is a Cessna crashing after a mid-air collision with the goose that sheared off its propellor.  The goose looks out of control, sir.  But the Cessna's missing propellor is harder to spot."
"Ah!  So that's why you needed the magnifying glass.  You were looking for a propellor."
"No sir.  See that passenger with the bare bum? Maybe she was in the loo when the 'Please Fasten Seatbelts' light came on . . .
"Enough Simpleforth!"
". . in which case she'd be showing a panty-line don't you think, sir?"
(Longer pause, then -) "Pass me your maginfying glass for a minute, there's a good lad . .  "